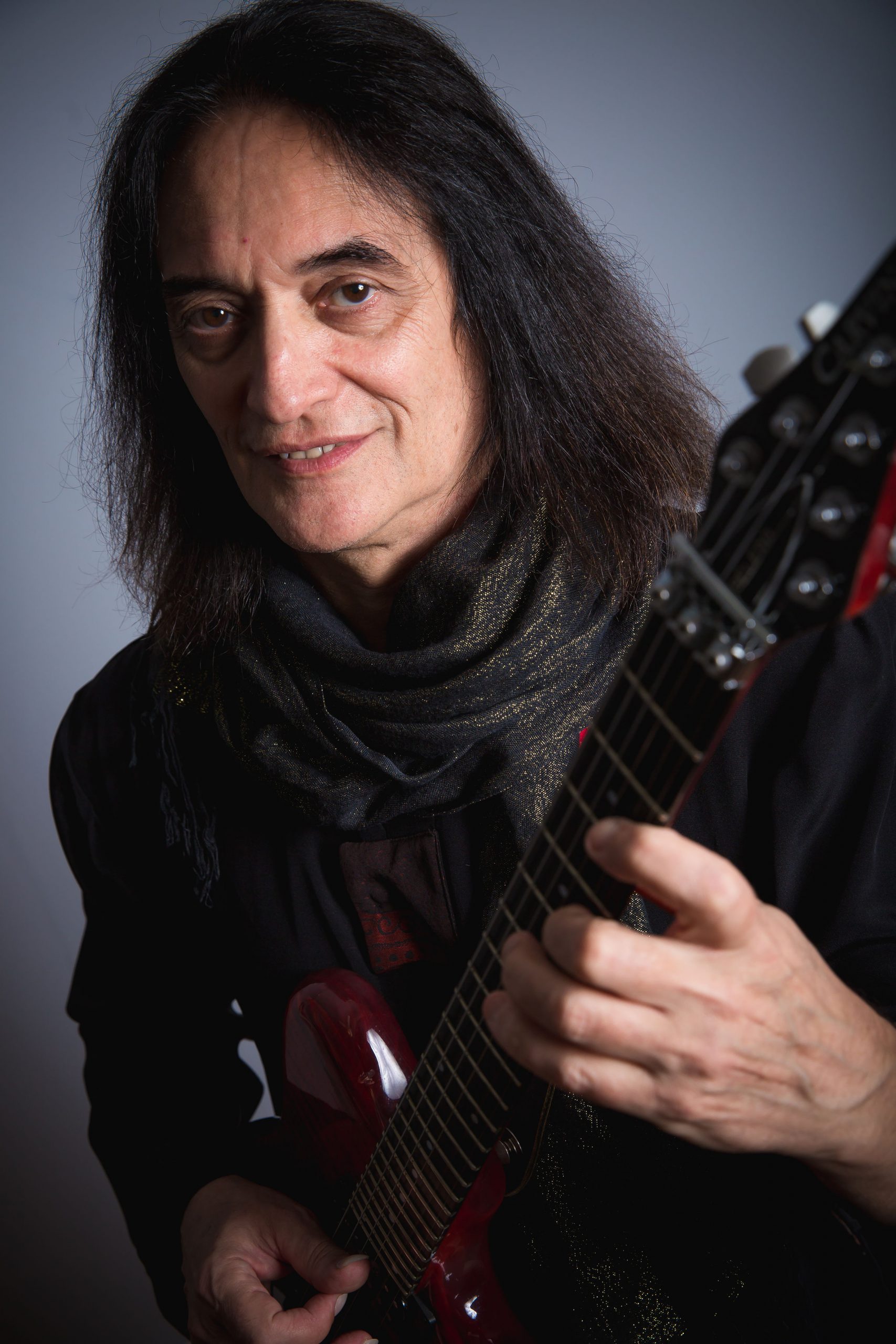 New York guitarist, pianist, and composer, Beledo was born in Montevideo Uruguay. He began formal music and piano study at age six. As the British Invasion began to take hold of airwaves around the world, influenced by the Beatles and other emerging pop rock bands, he gravitated towards and discovered a natural proficiency for guitar.

Beledo gained guitar-hero status in his teens, playing every theatre in his hometown of Montevideo, and captivating audiences in Uruguay and Argentina.

After a brief tenure with Uruguayan rock and blues super-group, Dias de Blues, Beledo pioneered the jazz-rock band, Maytreya, and later on, the mythical Siddhartha, inspired by the burgeoning jazz-fusion movement (Chick Corea, Weather Report, Soft Machine & etc.). His fusion efforts of the early 80’s in South America, during which he appeared at top venues and recorded with Pedro Aznar (formerly with Pat Metheny Group), Ruben Rada, and the legendary band, Opa, attracted media attention in the U.S., where he gained recognition as an upcoming talent in GUITAR PLAYER and JAZZIZ magazines.

Formal music studies continued throughout his college career. He performed classical music recitals on National Public Radio and in numerous theaters. While attending the University School of Music in Uruguay, he was a founding member of The University Conservatory Jazz Quartet, the university’s first jazz ensemble, sponsored by the school in an effort to integrate jazz into the traditional curriculum.
Beledo is the guitar player on the album, FORWARD MOTION, by the South African Jazz band, Ojoyo, featuring saxophonist and band leader, Morris Goldberg; drummer, Anton Fig and bassist Bakithi Kumalo.

In 1996 Beledo toured Europe and the Caribbean with the TROPICAL TRIBUTE TO THE BEATLES, featuring Tito Puente, Celia Cruz, Tito Nieves, Cheo Feliciano, and an all-star line up of Latin artists.

Versed in classical theory, composition and technique, adept in the traditional styles of his birthplace, drawing inspiration from vast and diverse modern musical forms, Beledo has earned his place among the most sophisticated, versatile, and gifted artists of our time. 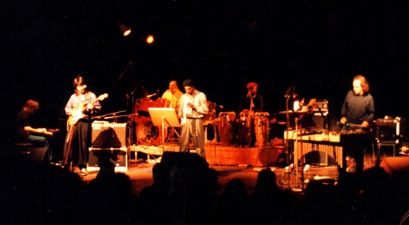 He gave a master class at the UNIVERSITY SCHOOL OF MUSIC offering his perspective of harmony, composition, and improvisation to classical music students. 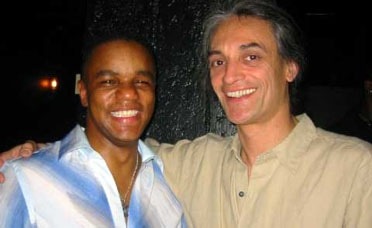 Beledo-Camiruaga Septeto at SALA ZITARROSA, Montevideo 2005
In 2001 BELEDO performed a series of concerts that included: guest soloist of the LANDES JUGEND JAZZ ORCHESTER HESSEN from Germany and opening act for MARCUS MILLER BAND. At this time, BELEDO went back to his home town of Minas, Uruguay where he performed an unforgettable solo concert at the Club Minas' Concert Hall. 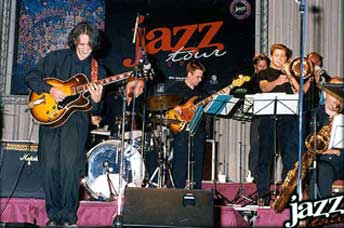 At the Jazz Tour 2001 in Montevideo

With Marcus in Montevideo
In 1997 BELEDO went to Uruguay to perform a concert presenting the album LEJANAS SERRANIAS at the Theatre of the National Library. This is a World-Jazz acoustic work that incorporates classic Uruguayan musical forms such as triste, milonga, chimarrita, and candombe rhythms, as well as Spanish flamenco styles. 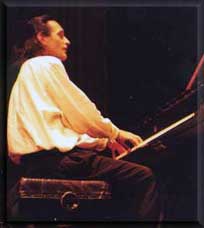 In Concert at the Theatre of the National Library in Montevideo
Above, left to right: Beledo, Jorge Camiruaga, Ariel Ameijenda, Edu Lombardo, Popo Romano
Beledo was the musical director of THE UPSIDE DOWN BOY, with music composed by CRISTIAN AMIGO. This musical was the 2004 production of the New York theatre and arts education and organization MAKING BOOKS SING.

Here in the U.S., he recorded piano and guitar for the candombe song "Speak To Me"by BAKITHI KUMALO from South Africa (bass player with Paul Simon, Herbie Hancock, Paul Winter, Gloria Estefan), included in his second solo album IN FRONT OF MY EYES released by the label SIAM RECORDS.

He recorded the South American Folklore CD: SPIRIT OF MY PEOPLE with JORGE ALFANO AND AKONCAGUA also featuring percussionist RANDY CRAFTON and produced by PETER KATER for the World Music label EARTHSEA RECORDS.

Home-based in New York, Beledo has performed with, among others, the following... 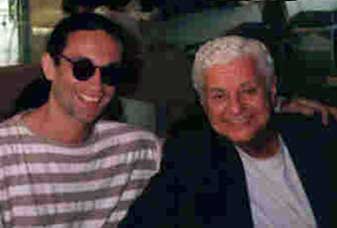 While he was based in Los Angeles, BELEDO attended the UCLA Certified Program for Film Scoring. Later, he co-produced music with PETER AYKROYD for the WARNER BROTHERS film, NOTHING BUT TROUBLE starring DEMI MOORE, JOHN CANDY, DAN AYKROYD, and CHEVY CHASE. 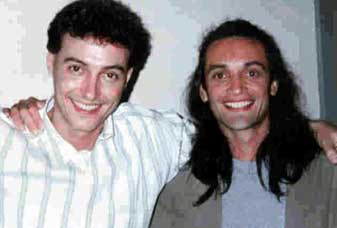 From the very Beginning 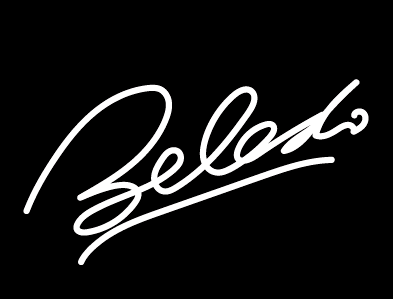